Matosinhos was the location chosen for the Sea Porto Hotel, a hotel that has 57 rooms, spread over six floors, inspired by the sea and the naval and port tradition, an investment of around five million euros, the hotel includes works by the architect Álvaro Siza Vieira and other emblematic references, such as the Casa da Chá da Boa Nova, the Cruise Terminal of the Port of Leixões and the Lighthouse of Leça da Palmeira. According to the investor José Armando Ferrinha, from Matosinhos and a native of Leça da Palmeira, the decoration was made by himself, together with some members of the team, with pieces that he acquired over time.

With a triple room on each floor, the Sea Porto Hotel, which took about six months to complete, has the Farol, Boa Nova, Bombordo meeting rooms available. Porto and Leixões, with 560 seats in the audience, the last two of which can be used together or separately.

The art begins in the entrance hall, with a work by Siza Vieira, passing through the carpets – with images of Matosinhos and Porto – and going to the cafeteria, prepared to receive customers inside and outside, where a production was placed in iron, depicting the Ribeira area. Also, the individual ones, arranged on the various tables that make up the space, contain a work by José de Almada Negreiros. “I don’t collect anything, but art and culture attract me strongly,” José Armando Ferrinha told Jornal de Matosinhos.

The hotel also includes the Deck Bar, with a terrace, a welcoming space where guests and external customers can enjoy moments of leisure, business or informal meetings and ‘Coffee Breaks’. The bar counter, imitating a container, lives up to the central theme of the hotel. At the entrance to the space, the piano that fills one of the walls leaves the door open for musical events. The menu consists of light dishes and others more elaborate, to satisfy different tastes.

With a team of 20 people with professional training and experience in hotels and restaurants, focused on providing an “excellent service”, the hotel intends to offer customers the “best that the cities of Matosinhos and Porto have to offer in terms of culture, historical and gastronomic heritage ”, organizing, in this sense, a set of partnerships with cultural operators, read- 100% national, invested in LED lighting. in ecologically responsible materials, in the optimization of resources through recycling and in raising awareness of the importance of conserving water and energy and in recharging points for vehicles in the private garage, in order to “not neglect environmental issues”, adds the statement.

José Armando Ferrinha, who defines himself as a “warrior” and a “man of commitments”, had his first contact with the hospitality industry at the age of 19, having a greater involvement in 1999, with the opening of the Tryp Porto Expo. The idea for this space came from the deficit in terms of hotel structures, registered at the time when he worked as a naval assistant. “When the ships arrived at the port there was a huge need for hotels and people had to be installed in Póvoa de Varzim and Esposende, since the three or four reference hotels in Porto were full”, he said. The hotel, which went from three stars to four two years ago, is for José Armando Ferrinha a “fantastic” space, which responds to the needs that are felt “next to the country’s second port, the second largest airport and Exponor”, ​​continuing to have “a very strong occupation”.

According to the investor, the idea for the Sea Porto Hotel came at a time when it was crossing Avenida Dom Henriques. “I stopped by the place and saw that it was for sale, it was the 7th of August,” he said, adding that, 14 days later, he signed the contract. Showing himself happy to participate in a project of this nature, he indicated that he always has new ideas to emerge but that he is a person “to do and not to say that he will build”.

Asked about tourism and the consequent affluence that this can bring to the hotel, José Armando Ferrinha said he expects both nationals and foreigners. He believes that what the municipality needs more hotels and that Matosinhos should “be part of Greater Porto, as an extension”. As for the creation of attractions that can mobilize more people to the city, he argues that local and civil authorities “have to be attentive and do something they always have with quality and innovation, because it doesn’t matter to be one more”.

The opening of the Sea Porto Hotel, which hopes to achieve a 70% occupancy rate by the end of the year and which already has reservations for 2018, took place on August 7th. The official opening will take place on the 7th, with the performance of the band “Os Jurássicos”, from Rancho Típico da Amorosa and a piano moment with the musician José Rito. 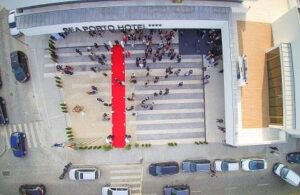